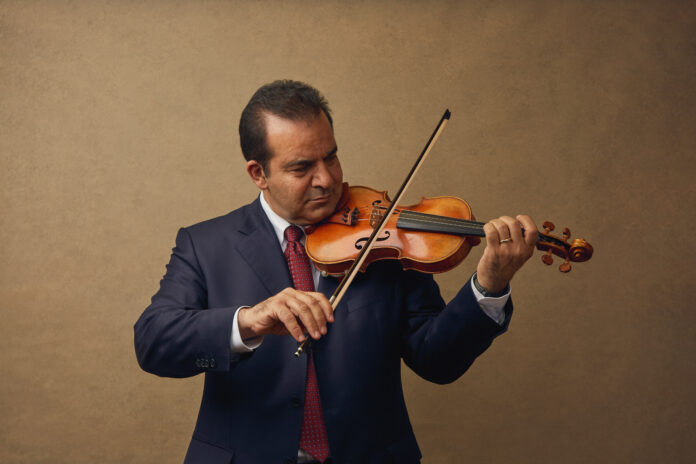 Immigration lawyer Amir Farzaneh came to Oklahoma after the Iranian Revolution in 1979, and he is now one of the most distinguished immigration lawyers in the metro. He could take his passion for the violin to the masses. Instead, he prefers his closet.

Thirteen years ago, immigration lawyer Amir Farzaneh went into a music shop to buy some flashcards for his children to help with their piano lessons. 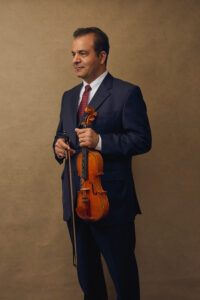 He walked out with a violin, instead.

“You know, for the first few years, you don’t really make any great sounds come out of that violin,” he said.

After years of slow-and-steady improvement, Farzaneh now studies with a internationally renowned, Persian composer in Vancouver, where they play together through Skype.

“I had been playing for over 10 years before I started with him, and the way I play now is not even comparable,” he said.

In fact, his entire life now is not even comparable to that of his childhood. Farzaneh was born in Iran and lived through the Iranian Revolution of 1979.

“That really changed the political and social landscape of the country,” he said.

And it changed the trajectory of Farzaneh’s life. After the revolution, he came to Oklahoma to go to college, following two brothers to the University of Oklahoma. He was planning on going to medical school after earning his bachelor’s in nuclear medicine and master’s in health administration, but he switched to law school and focused his attention to helping immigrants navigate through the immigration process.

“Immigration law is one of the most complicated parts of the law,” he said. “You either have to dedicate yourself to it full time or you are not going to keep up.”

Among his peers, and now with decades of experience, Farzaneh has the reputation of being one of the best immigration lawyers in the state – and the country.

“When you start having a good name in those communities, that starts to build on itself,” he said. “We do take cases that are harder or more complex that other attorneys think will be too much work or take too much time. It comes through all these years of experience that we have we get out there and fight for our clients.”

His success with immigration law and the violin isn’t as far apart as it might seem. He said the dedication for both starts the same way.

“Just like anything else, for any achievement, there are several phases,” he said. “But the first phase is to make the decision. When I started the violin, I didn’t read any music. I couldn’t even read the notes. Nothing. If you would have said, ‘What are the notes?’ I wouldn’t have known any. The first thing Is you make the decision. And the second thing is to just carry it out. Just carry it out to the next decision, the next day, the next thing. You don’t have to worry about anything else. Just do the next thing in that decision.”

About one million next decisions later, Farzaneh is an accomplished violinist.

“The best and most effective way to reduce stress for me is by playing the violin,” he said. “Those hours when I play violin are the hours when my mind is completely at rest. It is focused on one thing and one thing only — playing music. You have such a euphoric feeling when you are playing music.”

But does he gather his family and friends or play for audiences? No. Instead, it’s his wardrobe that gets a nightly concert.

“In our master bathroom, we have a storm shelter with almost a foot deep concrete wall,” he said. “And I go in there and play and nobody hears me – especially as loud as I play.  There isn’t a day that I don’t play. By 10 p.m. or so when all the work is done and dinner is done, I go to that closet, and I play for a couple of hours.”

He’s come a long way from the dad looking for flashcards.

“My wife says now that she really enjoys it,” he said. “When I started, she wasn’t a big fan of it. But now she says it’s amazing. And the violin is so amazing. It’s one of the best things that has ever happened to me.”