A Profile of Walrus Audio in Oklahoma City 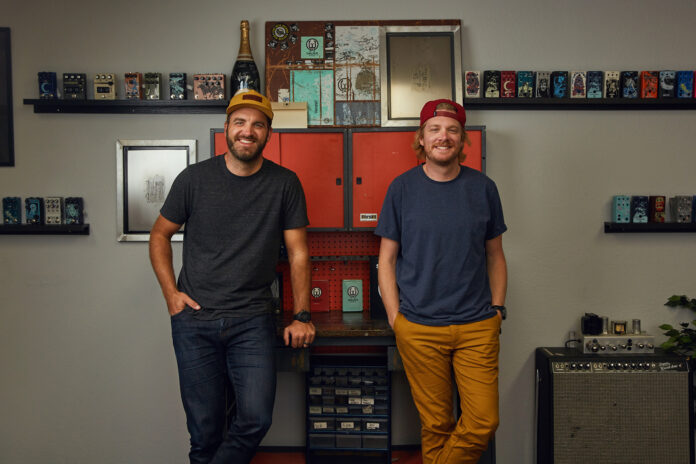 Walrus Audio crafts thousands of guitar pedals for guitarists from those in OKC’s backyard to all around the world.

When something is called “Walrus Audio,” the story of the name is going to be excellent, right?

“It’s not a fun story,” owner Colt Westbrook said. “The previous owner had another company called Mammoth, so I think he just liked tusked animals.”

Westbrook joined the Oklahoma City-based company, famous for their guitar pedals, in 2014 when there were only three employees. Leaving his job at Chesapeake Energy was a risk, but he said he embraced the general manager role initially, eventually becoming a minority owner. (The company has been owned by a private equity firm since 2018, with Westbrook bearing the title of president.)

Music has long been a passion, though.

“I played the local music scene for a while, but I had a full-time job,” he said.

As to how popular the band was: Any chance anyone locally would know the name?

“Absolutely not,” Westbrooks said and laughed.

The pedals Walrus produces are known both for their quality and their beauty. Yes, beauty. Gone are the days of dingy, institutional gray metal pedals. The designs coming out of Walrus combine names inspired by sounds — albums, riffs, bands, etc. — beautiful artwork, and the latest technology, all encased in a product with a lifetime warranty. The graphic designers are a diverse pool of artists from as far away as South Africa and the United Kingdom to as close as OKC and Westbrook’s circle of friends.

So, what exactly do the pedals do?

One musician famous for creating beautiful textures with Walrus Audio equipment is Tom Renaud, guitarist for the Michigan-based indie/alt band Lord Huron. Renaud met the team after a gig in Norman.

“We had a day off from touring, so we drove up from Norman, tried out some pedals and even recorded a song in their garage,” Renaud said. “I took some pedals home after that visit in 2015, and I’ve used them ever since.”

Renaud heard about Walrus Audio from their tour manager, who had learned of them through his work with a previous band. Word of mouth is important among touring acts for a variety of reasons, and Westbrook said that network has been crucial to the company’s success.

“Brand advocacy and public reviews via word of mouth were crucial, and so too was people understanding that we were designing and producing something we think is remarkable,” Westbrook said.

Renaud is very specific in his praise:

“I think Walrus’s strength as a pedal manufacturer, aside from the cool art on the tin, is taking pretty standard, classic guitar effects and adding extra features and layers of tweakability and doing so in a way that’s always accessible and user friendly. They sound great and are super versatile, but the learning curve for their stuff is always really simple. That’s especially useful in a live performance setting — it’s easy to tweak on the fly. If I need an app, Bluetooth and a 50-page manual to operate your guitar pedal, I’m probably just not going to bother with it.”

Affordability has been a factor in their success, too. Westbrook said the company stays close to the $200 price point: It’s a number that’s easy for a professional musician and realistically aspirational for a teen in a garage band. The company will ship 60,000 units this year, to everyone from lead guitarists in well-known bands to hobbyists.

Infographic: The Thunder’s Impact By the Numbers