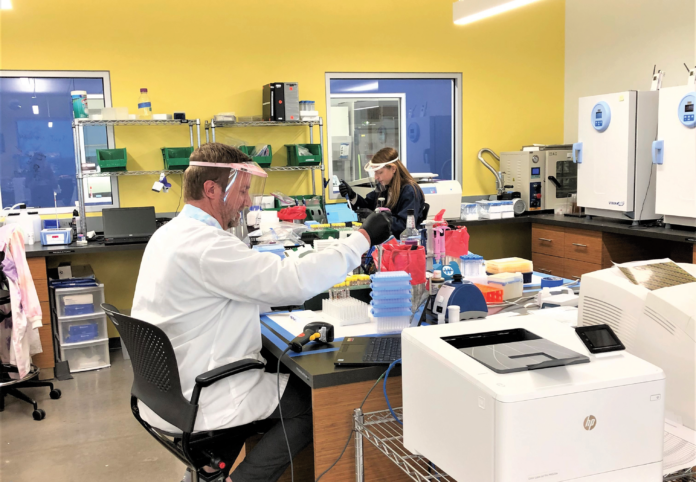 During the pandemic, IMMY Labs became synonymous with Covid rapid testing. But, the lab did not even exist before March 2020. Sean Bauman, IMMY president and CEO, said he saw a massive need arise for easy testing and quick results, and he knew they could be the innovative team that could solve it.

“We started a company and reported our first patient result in 10 days,” he said. “Nobody starts a lab in 10 days. If you said, ‘six months,’ I’d say you’re crazy. But that’s what can happen when you have people focused single mindedly on a problem. People were working their tails off.”

He said the true innovation was in how they delivered the rapid tests, not that they were providing them.

Chick-fil-A truly was the model: Bauman videoed himself driving through Norman’s Chick-fil-A to see how they ran they operations. Later, he had the Norman Chick-fil-A franchisee owner come talk to his team on how to implement their practices to IMMY’s Covid testing.

Soon, IMMY Labs was running 1000s of Covid tests every day. Then, IMMY Labs had to pivot again to provide vaccines. The prototype for how the lab delivered mass vaccinations was Bauman’s mom, who has mobility issues, he said.

“What we came up with is that we needed to get you to your chair as fast as you can,” he said. “We’ll bring a nurse with a vaccine to you. We looked at ‘what’s our bottleneck? How many vaccines can we give?”

In the end, IMMY Labs, which began as an answer to a problem because of a pandemic, administered hundreds of thousands of Covid tests and vaccines. But, IMMY – which Bauman’s parents founded in 1979 – has seen record years for the last 15 years, and it 2007-08, IMMY pioneered a simple test to help determine fungal meningitis, which impacts HIV patients significantly.

“We are now a global leader for diagnostics for this disease,” he said. “We are reducing the number of people who are dying, just because we adapted technology that already existed. We got to see the problem and walk in their shoes. It is an incredibly rewarding thing to do.”

Real Estate Innovator of the Year – The First National Building