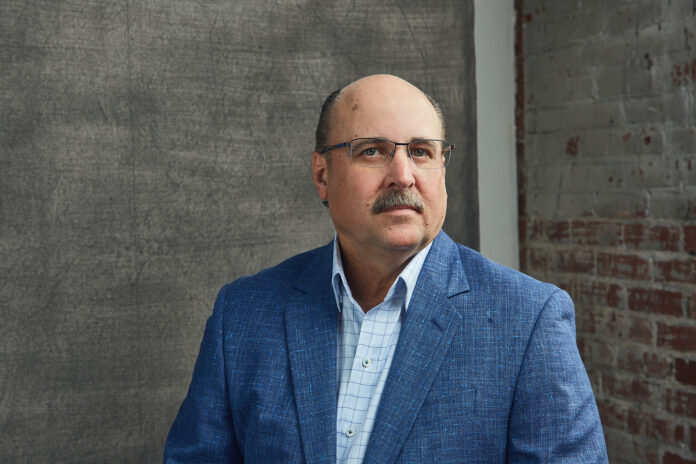 “I’ve been very fortunate twice now to be involved in the development of two lifesaving drugs that have their entire roots in Oklahoma technology,” Rollins said.

And those drugs – and the companies formed around those discoveries – led Rollins to co found, with another Oklahoman Russell Rother, the largest-ever unicorn, or a business with a valuation of more than a billion dollars, with Oklahoma roots.

And a billion dollars isn’t even close to the valuation of the unicorn company Rollins’ founded, Alexion. Try $39 billion. In 2020, AstraZeneca acquired Alexion for that much. In fact, Rollins’ story is one of those great Oklahoma stories you’ve probably never heard.

He grew up in Moore, and he went to college – earning his doctorate in microbiology and immunology – at the University of Oklahoma. During his graduate work, he was researching to find a drug that could treat a molecular defect of an extremely rare blood disorder, Paroxysmal Nocturnal Hemoglobinuria. And he did.

“The drug protects the patients’ red blood cells, and it basically saved their lives,” he said. “There are thousands and thousands of patients alive today because of this drug.” When he first discovered the drug, he said he didn’t realize all that it would become.

“At that time, it was a great discovery, and it was determining a key mechanism in a group of patients with a very severe disease,” he said. That discovery became a business
during a post-doctoral fellowship in molecular immunology at Yale University.

“It was the transition from basic research to entrepreneurial thinking and developing a company around technology,” he said. “And that happened because I was at Yale in a very different kind of environment from an entrepreneur and business standpoint where people were much more in tune with tweaking technology and building companies around it.

It forced me to leave academia and take a chance on developing this technology. “It obviously worked out very well.” Obviously.

Rollins then spent 16 years in the northeast developing Alexion, using the Oklahoma- based research he created while at OU as the foundation. Growth was rapid: Rollins founded Alexion in 1992 and by 2000, it was valued at a billion dollars.

“It was sort of mind boggling,” Rollins said. “As a scientist and a drug developer, you are focused on developing the drug and doing the clinical trials. You are not really focused on the valuation of the company and what your shares are worth on any given day. To suddenly wake up one morning and realize your company is worth a billion dollars is pretty interesting.”

He said all of the elements were in place in the Northeast to make the company
grow that did not exist in 1990s Oklahoma. Rollins returned in 2008 to a very different Oklahoma when he came back to start another company, Selexys Pharmaceuticals.

“Oklahoma had grown quite a bit,” he said. “When I left in 1990, it probably would have been impossible or very difficult to put a company together and raise the kind of money that is necessary to build a biotechnology company at that level. When I came back, I had the experience and people had someone they could invest in. They had a C-level executive that had a track record of success, which didn’t exist in Oklahoma. We had a great story to go out and tell potential investors.”

Conditions were now such that he could create a company in Oklahoma and raise his family where he wanted, he said. “It allowed me to come back home to my parents and my in laws, who are very important to me,” he said. “I had a young daughter at the time. We also thought Oklahoma was a better place to raise her than the hustle and bustle of the Northeast,” he said.

“I had the freedom and the choice to go wherever I wanted to go and do whatever I wanted to do, so I came home to try to do again what we had done.” And he did do it again. This time, Rollins, as president and CEO of Selexys Pharmaceuticals, with his team, focused on developing the first new treatment for sickle cell disease in more than 50 years. The Selexys drug they developed reduced the number of annual sickle pain crises by 50 percent in trials.

But this time, it was all done in Oklahoma.

“All of our manufacturing was done in Oklahoma,” Rollins said. “All of the cell line development was done here, all the clinical trials. All the basic science research was done at OMRF. It’s a pretty rare thing, I think, to have done this all in Oklahoma. We couldn’t have built Alexion in Oklahoma in 1990. It had to be on the east coast. But we can do it now.”

“When we started, we raised about close to $36 million, and a lot of that was local money,” he said. “And then within several years, we turned that into a $665 million dollar acquisition by Novartis that produced a great therapy for sickle cell patients. It’s a great
story for everyone.”

But his story isn’t done yet. Rollins is off and running on his third company, Tetherex Pharmaceuticals. He’s now focused on people with severe asthma, and he’s developing a COVID vaccine that is a nasal spray.

“We’re doing a COVID vaccine trial in Australia now,” he said. “Most people don’t have a clue we have a cutting-edge COVID vaccine being developed in Oklahoma. It is an intranasal vaccine, no needles. And hopefully it will develop immunity in the nasal tract to combat the virus at the source.”

After all these years growing companies that grow in valuation beyond most CEOs’ wildest dreams, Rollins said the real satisfaction, however, is in the science that can transform and save lives.

“That’s really what you want in your obituary,” he said. “It’s not the bucket-load of money associated with these drugs. It’s what I did for mankind, and I got to do that in my home state with Oklahoma technology that helped thousands around the globe. I’ve met a lot of the patients that have been treated with my drugs and I’ve heard their stories. If you’ve seen a patient with PNH or sickle cell patients, and they can’t get up and walk because they are in so much pain. Then you give them these drugs, and it completely changes their lives. They are able to work again. It literally saves their lives and changes their lives. That’s what makes you feel good when you get up in the morning.”

Sign up for our weekly newsletter and get the latest 405 news & events happening straight to your inbox!

Krystal Yoseph honored her father and their heritage in the name of her public relations firm she began in 2018. Krystal Yoseph is the daughter...

The Innovation District Set to Bridge Inclusion in OKC

Top Attorneys: Your Guide to Local Attorneys and Practices