Roam Where You Want To 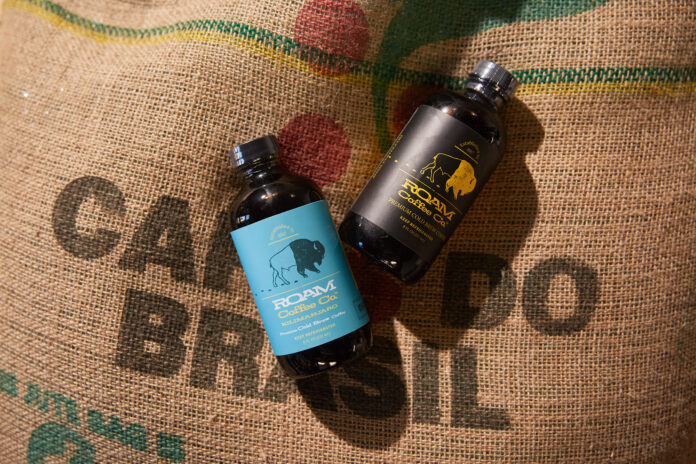 cold brew. And that is what we set out to do.”
Before creating Roam Coffee Company together, Miguel

Soares and Dom Noel originally met and became friends in 2010 in a Jujutsu class.

“Because neither of us originally grew up in Oklahoma, we eventually became one another’s family,” he said. “We’re brothers.” At that time, Soares, with a background in the Marines and aviation, had been experimenting with creating his owncoffee at home.

at Starbucks every month,” he said, a bit chagrined.
When he let Noel, an engineer grad from OSU, have a taste of what he’d been creating, Noel suggested that the two of them

go into business together.
Roam Coffee Company is the only FDA-approved cold brew

coffee company in Oklahoma, and it took them 18 months of hard work to make it happen.

“The health inspector laughed when we talked to him about it for the first time,” he said. “We bootstrapped everything.”

Soares said the company is named after a roaming goat, and it begins with the story of coffee, as rich and storied as any treasure in history.

“Originally grown in Ethiopia from the 1500s, coffee berries have been pirated and stolen,” he said. “Nations considered these berries a drug and a treasure, and those who know how to blend its richness into what we drink each morning–well, those wizards were our alchemists.

“An Ethiopian goat herder walked down a mountainside one morning and noticed a few of his goats were acting very strange. Jumping around, dancing. He eventually discerned that they were eating some of the berries from the coffee tree. To investigate, he did, too. He then began dancing with his goats as well, and then shared them with other people in his village. Eventually coffee beans began to be roasted and boiled into a drink–and then stolen and spread into Yemen. And wherever coffee went, it was brewed, enjoyed together in a communal environment, and then there were talks of philosophy and science, which eventually led to talks of government and revolution.”

Listening to Soares and Noel talk about the flavor profiles in their cold-brew coffees–where and how the beans were processed, the notes, the ratios, the soils where the beans were grown, the altitudes in which beans are brewed–is like listening to great wine sommeliers.

“Coffee, much like wine, is affected by the environment that it grows in,” Soares said.

Soares and Noel have a five-year game plan that involves opening a tasting room in Oklahoma City that has a coffee on-tap area, a lab where curious coffee connoisseurs can taste the flavors of new beans, see the lab and explore the process, as well as taste new recipes being developed.

As Roam continues to show up for community functions like the Hangover Brunch and the Girl Scouts Cookies and Cocktails, they said they look forward to watching their partnerships grow with other coffee companies in Oklahoma, and they expect that you will see much more of them in the future.

If so, you’ve been warned about their coffee, which very possibly can lead to good conversation, possibly even revolution. Take note.

Slow Down to Speed Up

Day in the Life: Kenton Tsoodle

Put Me in, Coach