The District Divide: The Future of OKC’s Districts 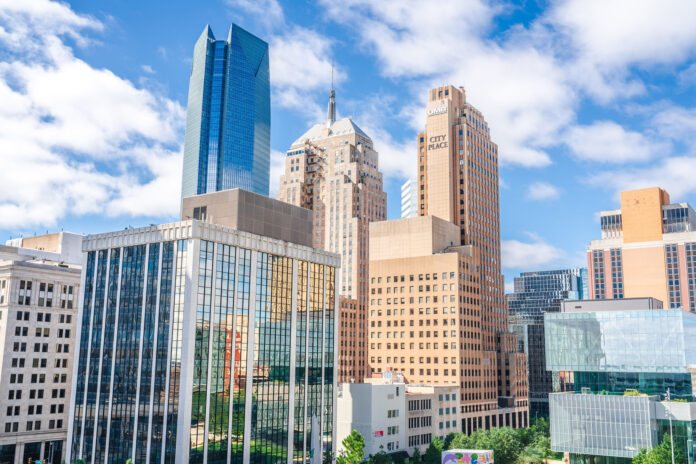 A district can be thought of as a section of a city that is to some extent “frozen in time.”

That’s according to Gina Sofola, the founder and owner of Sofola and Associates, a planning and project management firm in Oklahoma City. Sofola was project manager on the recent Page Woodson project, a brilliant bit of placemaking that created a new neighborhood with what had been an abandoned high school as the centerpiece.

“A district emerges when you have an asset or cluster of assets, as with an entertainment district, that can catalyze growth and join diverse businesses and neighborhoods around a central theme,”Sofola said.“The theme is usually related to what made it known as a ‘place’ to begin with. Without the common theme or economic engine—entertainment, dining, shopping, business, art—it doesn’t become a destination.”

From a technical standpoint, a district is also a geographic area within a city that has an additional overlay beyond the basic zoning requirements of the city. Essentially, the overlay implements a second layer of planning control that incorporates neighborhood-specific covenants, policies and goals. For historic neighborhoods, that overlay can, according to Sofola, reduce risks to residents, investors and businesses in the area that might otherwise be negatively impacted by changes in the neighborhood or surrounding areas.

Downtown OKC formed in 2000, and the City of Oklahoma City established its first Business Improvement District in 2001. The Downtown OKC Partnership now oversees six districts, all of which are part of the Downtown BID and so pay an assessment for maintenance, development and promotion in a public-private partnership. The original BID group has evolved— Midtown and Film Row were added later—and just last year, Downtown OKC remapped the edges of City Center (formerly the Central Business District) and the Arts District. 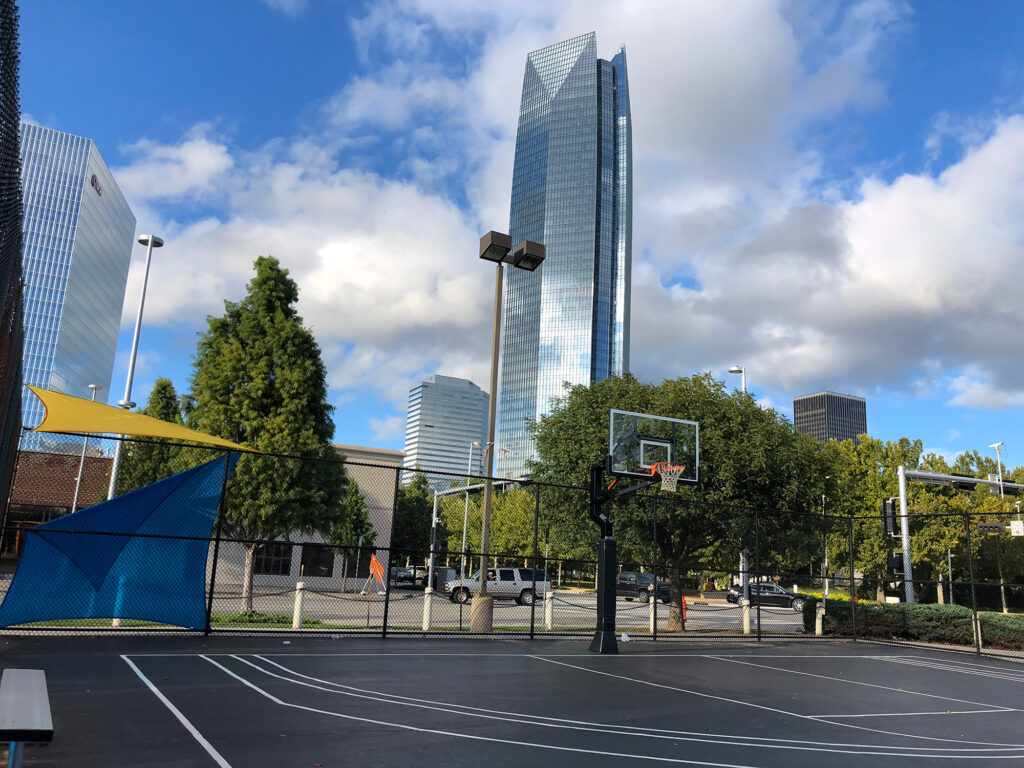 “We finally just acknowledged what everyone was already calling Film Row and West Village,” said Kristen Vails, director of placemaking for Downtown OKC. “The Arts District always incorporated the two areas, but now that they’ve developed independent identities, we’ve started noting them on the branding and marketing for the district.”

The remapping highlights an ongoing issue with districts, including historic areas such as Paseo: The district will ultimately have to deal with how the public thinks of the district. Paseo is the rare area of the city where regional and national chains have been prevented from developing, a choice that preserves the feeling and aesthetics of “local.”

In terms of Sofola’s “common theme,” Paseo is bound together with a shared purpose—visual and performing arts—and an architectural aesthetic that makes photos of the district instantly recognizable. Plus, the only new development in that area in decades respected the aesthetics of the district in such a way that Scratch, Frida and Oso fit seamlessly into the landscape.

Rachel Cope, president and founder of 84 Hospitality, has restaurant concepts in two neighborhood districts, The Plaza and Paseo. It’s actually three, counting Jefferson Park, but more on that below.

“There are distinct advantages to neighborhood districts,” she said. “You have built-in clientele, and there is a comfortability and quaintness that comes with it that you cannot build that helps make our restaurants feel timeless. As the neighborhoods continue to develop and fill in commercially, the property values go up, and that is where the disadvantages emerge.”

Cope noted that rising prices can drive out small businesses, making room for regional and national chains with budgets that can afford the price increase. It’s the business version of what we know as gentrification, and its impact affects district residents too.

“Districts are good and bad for property values,” Sofola said. “People will flock to a district with good governance, but increased values can lead to gentrification, and that prices out those whose creativity and risk-taking developed the original identity, so the original advocates for the place are driven out.”

Back to public perception of a district: Paseo’s uniqueness, the governance that led to it being one of the great destinations in the metro and its commitment to local have combined to make it the best food district in the city: Frida, Scratch and Goro are among the city’s very best restaurants.

But that popularity has spilled over into neighboring Edgemere, where Burger Punk (owned by Cope), Flora Bodega and the inaccurately named Paseo Daiquiri Lounge now operate. It’s a different district, but the public doesn’t care. From a user experience standpoint, the edge of Jefferson Park is now Paseo—although it’s not beholden to the rules that have made Paseo what it is.

Sofola said it’s not unusual for spillover to lead to tension between districts.

“Occasionally, a memorandum of understanding can help matters, but spillover isn’t necessarily good or bad for a district,” she said. “The growth around a successful district should be expected as more investors and entrepreneurs want to share in the success.”

Areas like the Ironworks District (roughly Main St. to Linwood, and Western to Indiana) need redevelopment and new builds. Their future livability is completely reliant on an infusion of capital and entrepreneurship. Mayor David Holt said areas like this highlight the necessity of properly defining “gentrification.”

“It’s no coincidence that Oklahoma City’s growth has coincided with the development and growth of our districts,” Holt said. “And gentrification is a real issue when prices threaten to force out the people who originally had a stake in those neighborhoods, but all development isn’t gentrification. The Wheeler District now sits where an abandoned airport was; that’s not gentrification. Developers have an obligation to work with existing stakeholders, and advocates have to make sure they aren’t standing in the way of improvements the neighborhoods need and the stakeholders want.”

The entertainment district has more room to develop than any other downtown district. The new Renaissance Hotel is under construction, and Provision Concepts has signed an agreement to operate a modern-American restaurant called Culprits on the ground floor. The Texas-based Truck Yard, a food truck and entertainment complex, will break ground in June, and Brian Bogert’s first Dave’s Hot Chicken franchise is under construction in the old Sonic restaurant space.

It’s fair to say there’s lots of potential still, but several problems, too. The area around NW 10th between Harvey and Hudson has become problematic for residents and police during “club hours.” Loud cars, gunfire, overflow crowds and trash plague the area. On the edges, though, good development is happening, including expanding the Make Ready Project on NW 13th, the continued growth of Harvey Bakery and the soon-to-open Lunar Lounge in the Plaza Court development. Tulsa-based Elliot Nelson (McNellie’s, Fassler, etc.) has signed an agreement to run the former Bleu Garten.

Here’s another underdeveloped area where spillover has fueled success for small businesses. Jenny Nguyen, co-owner of Lee’s Sandwiches and VP of the Asian District Cultural Association, is working on a vermicelli bowl concept at NW 25th and Classen scheduled to open in late summer. Gong Cha, a national bubble tea concept, will be moving into 2800 N. Classen. A locally owned laundromat named Spin City should be open when this issue comes out. Nathan Cao is developing a multi-family complex called New Saigon on NW 26th and Western, a 36-unit complex to feature “smart studios” that Cao calls “the most affordable for new construction in the urban core,” with prices around $800 per month. The transit-oriented development is designed to capitalize on phase two of the OKC Streetcar.

This is the most ambitious placemaking project in the city right now. Young entrepreneurs like Reed and Adrienne Jaskula (Fair Weather Friend Brewing), Riley Marshall (Bar Arbolada and the soon-to-open Flycatcher Club) and the Tower Theatre team (Beer City) are creating an entertainment cluster at NW 3rd and Klein that promises to bring further growth to an area that ranges from blighted, including significant levels of crime, poverty and abandoned property, to improving—Fair Weather Friend, Dead People’s Stuff, Edge Craft Barbecue, etc.

Orr’s Farm for His Family