HomeIn PrintThe Future of Oklahoma’s Public Transit
In PrintStart Up

The Future of Oklahoma’s Public Transit 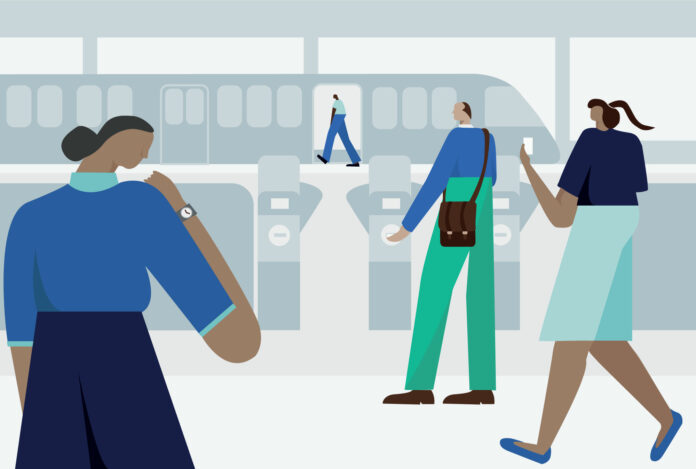 Downtown’s streetcar system will get an infusion of support starting in fall 2023, when RAPID transit’s fixed guideway system is rolled out to 23 stops along three branches throughout Oklahoma City. It’s all part of a four-component, long-term plan for a comprehensive public transit system for the metro.

To see the Oklahoma City streetcar as a standalone solution to public transit
is to invite a variety of misapprehensions. The most common of those is: Why do I see a bunch of empty street cars when I’m downtown? Given the long-term plan, that’s like asking why the highways are nearly empty at different times of day. When downtown is viewed as the central hub for a mass transit system, the street car’s purpose as a downtown circulator is more apparent.

Based on the Fixed Guideways Study adopted by the City of Oklahoma City in 2006, the streetcar functions as a circulator at the terminal point of a network of transportation modes that include enhanced bus service, a rapid transit bus separate from normal bus service, and commuter rail. The four modes work together to “strengthen the Oklahoma City area’s employment and activity centers,” per the study’s verbiage.

“When the city adopted the study, there were four components to the long-term plan,” Mayor David Holt said. “The streetcar was the cheapest, so it was first. As part of MAPS III, it allowed us to check an entire box in the mass transit system plan.”

According to Embark’s numbers, the streetcar has already logged 221,000 passenger trips in 2022, up 26 percent from the previous year. Customer satisfaction is 39 percent above the national average, which means people who ride the streetcar are rating it relatively highly compared to other cities. The disconnect seems to be between the streetcar’s purpose and the general public’s perception of its current usefulness. Seen as part of the larger system, though, it’s already doing its job.

“We dug into the data and discovered that Monday to Friday ridership is only about 50 percent of pre-pandemic numbers, so we haven’t fully rebounded on daily ridership, but some of that is related to the rate at which people have
returned to work,” said Jason Ferbrache, Embark director and OKC assistant city manager. “The weekend usage is much higher, with events and activities downtown, and our surveys show that much of the ridership is made up of visitors to Oklahoma City.”

In other words, the streetcar is doing what it was designed to do: circulate people around the urban core after they arrive downtown. Could usage be higher? Of course. And the next phase of the mass transit plan is likely to help that become a reality.

In 2019, Embark expanded the city’s bus service with Sunday hours on 16 routes for the first time in more than 50 years. At the time, Ferbrache noted that 67 percent of the bus service’s riders did not have access to a working personal vehicle, so the bus was critical in getting them to and from jobs. Oklahoma City’s lack of a robust and efficient mass transit system has long been an issue for large swaths of our working population – and for students at commuter colleges as well. Between volatile gas prices, insufficient coverage and inflation, getting to and from work is fraught with complications for working-class locals.

The expanded bus service and streetcar are two of the modes, and now construction has begun on a third mode: rapid bus service. Oklahoma City’s traditional bus service and the streetcar intersect at the Embark’s downtown transit center on Hudson Avenue between Northwest Fourth and Northwest Fifth streets. A rider simply needs to walk across the street to catch the streetcar after disembarking, and vice versa. RAPID (capitalized like an acronym, but it’s not) will add a third mode to the system by means of new buses running on a fixed guideway route, with the terminal points of the first branch at the downtown transit center and the Kilpatrick Station on Northwest Expressway.

For transportation non-experts, a fixed guide-way system uses dedicated lanes and smart traffic lights in existing traffic corridors to facilitate mass transit at a higher rate of speed. The new RAPID buses will use 23 different stops along three stems or branches: Northwest Expressway, Reno Avenue and Southwest 59th Street – three current enhanced bus routes. Rather than use existing stops, the new buses will utilize a network of raised platforms – much like the streetcar – now being constructed along the routes.

“This is the city’s first attempt to put high-capacity transit where people live and work,” Ferbrache said. “The buses will arrive at the platforms about every 12 minutes, so there is no need for a schedule. We are planning multiple ‘park and ride’ spots along the routes, with the first being Lake Hefner at Meridian and Northwest Expressway.”

The goal is to make it possible for people in disparate parts of the city to drive to a location closer to home, jump on RAPID, and be at the Paycom Arena in half the time (or less) it would take to drive by car. Ferbrache said the new, dedicated buses are different from standard city buses, with reliable WiFi, charges for electronic devices and more stylization. The full launch is expected in fall 2023.

Currently, our transit system moves almost three million people per year in all modes, according to Ferbrache. In 2022, we already hit 2.7 million by September. If Oklahoma City continues to grow, mass transit will become increasingly important in avoiding the worst kinds of traffic issues experienced by cities with high growth and inadequate infrastructure. The fourth mode – passenger rail – is expected to mitigate many of these potential problems. We’ll look at that mode in an upcoming feature.